Previous postWhat Is The Content Marketing Funnel? via @sejournal, @rio_seo
The 18-Year-Old Who Went From Heart Surgery to Six-Figure NFT SalesNext post 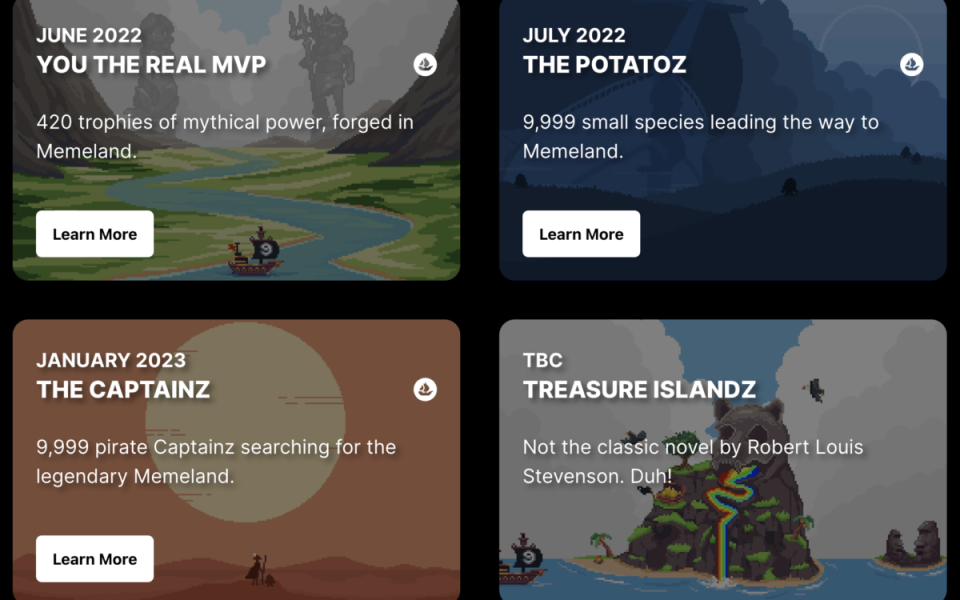 9GAG’s Memeland: Meet The Studio Behind The Potatoz and Captainz

by docdna
in brands, Guides, web3
Comments are off for this post.

On January 4, 2023, The Captainz NFT collection began its 48-hour mint period. Priced at 1.069 ETH per mint, the collection of 9,999 pirate-themed NFTs has seen 6,790 ETH (more than $9 million) in trading volume in the first five days of its existence. With a floor price currently sitting at a healthy 5.34 ETH, The Captainz is tracking on OpenSea’s Top 10 collections list by both 24-hour and 7-day trading volume.

But The Captainz’ success didn’t come out of nowhere. The collection is just the latest iteration of one of the NFT space’s most successful and irreverent communities: Memeland. Here’s what makes the Web3 brand such a hit, and why you should expect even bigger things from the community in 2023.

Memeland is a Web3 venture studio created by Web2 mainstay 9GAG, the Hong Kong-based meme-centric entertainment website that launched in 2008. Having built up a following of more than 200 million across its various social media platforms since then, 9GAG was well-positioned to bridge into the Web3 space when it announced Memeland in April 2022.

9GAG CEO Ray Chan and team started Memeland as the social platform’s Web3 business wing, which has the self-stated goal of underpromising and overdelivering, according to the studio’s official website.

“The core mission for Memeland is to create a creator economy on Web3,” explained Chan in a September 2022 podcast episode with The Nifty. “We [are trying] to build social media on Web3, but in the sense that, hey, can the creators have ownership of what they create?”

Memeland’s approach to Web3 is simple: watch the market, observe trends that have become familiar to NFT communities, and “micro innovate” on top of those to offer their community added value. The strategy seems to be working. Of course, it doesn’t hurt that Memeland’s advisors and investors include Animoca Brand’s research arm Animoca Digital Research, Moonbirds’ Kevin Rose, and VeeFriends’ Gary Vee.

To date, Memeland has released three NFT collections, each serving as a point of entry into the Memeland economy, which is likely to include a metaverse at some point in the venture studio’s future.

YOU THE REAL MVP

Memeland’s inaugural NFT drop came in June 2022 with YOU THE REAL MVP, a premium alpha-group membership pass of 420 golden trophy JPEGs that grant holders access to and information about upcoming Memeland drops, private access to the Memeland Discord MVP Lounge, IRL events, and collaborations. The collection represents the top tier of the Memeland economy and was a clear signal to the NFT community that 9GAG’s Web3 arm aims to build a project to compete with some of the most prominent players on the scene.

Memeland released the collection via a blind auction that set the price of each NFT in the collection at a hefty 5.3 ETH. Within seven days, Memeland claimed that YOU THE REAL MVP generated more than 900 ETH in revenue. Despite the bear market, its momentum has grown — with the collection’s floor price currently standing at 38 ETH.

The follow-up to the YOU THE REAL MVP release, Memeland’s Potatoz was a free-mint collection of 9,999 PFPs that dropped on July 20, 2022. The collection features potato-themed characters and traits inspired by memes and pop culture and serves as the base-level entry point into the Memeland economy.

The potato theme comes from 9GAG’s long-standing tradition of rewarding readers of long meme posts on the site with a picture of a potato featuring the words “sorry for the long post, here’s a potato” over the top of it. Early collectors could “grow” their Potatoz NFT, a process similar to Moonbirds’ “nesting” process, to evolve it from Stage 0 to Stage 5. The more a holder stakes their Potatoz, the greater the chance they’ll have of receiving benefits down the line as the Memeland economy expands (via allowlist spots for future drops, access to IRL events, and Memeland’s future token, $MEME).

Over time, the NFTs in the collection slowly evolved from semi-anonymous twerking potato characters, plant sprouts, donuts, and various other forms into fully-fledged animated potato humanoids that look straight out of a video game character selection menu. With 4,189 owners, the collection has seen more than 20,357 ETH ($27 million) in sales volume since its release and currently has a floor price of 2.1 ETH.

Having gone through two successful collection mints in 2022, Memeland released what it calls its “premier” collection, The Captainz, on January 4, 2023, for a mint price of 1.069 ETH. Like The Potatoz, The Captainz is a collection of 9,999 utility-enabled NFTs that acts as a mid-level entry point to Memeland, sitting between YOU THE REAL MVP and The Potatoz. The utility and perks to Captainz holders have yet to be fully revealed, and the artwork remains a mystery.

The Memeland website indicates that Captainz holders will receive benefits related to its $MEME token and Treasure Islandz, its upcoming project rumored to be a Memeland’s metaverse experience. In the few days since its release, The Captainz has done 6,774 ETH ($9 million) in trading volume and has a current floor price of 5.34 ETH. In the wake of the collection’s success, the Memeland Twitter account responded in true 9GAG-inspired fashion.

Captainz holders also have a say in the Memeland DAO, helping to make decisions about the DAO treasury, future brand partnerships, governance rules, and more.

The future of Memeland

Memeland has exhibited a solid understanding of the NFT and crypto markets, creating and delivering to its community during one of the lowest points the industry has yet seen. Similar to Reddit’s NFT wizardry, 9GAG has shown Web2 social media platforms that it’s possible to intelligently navigate the Web3 space, even if they’re not native to it.

Memeland has repeatedly emphasized that its coming $MEME token will be different than the average NFT token that “normal people don’t care about.” How their team introduces that token in the future will significantly affect the ecosystem, potentially driving it to even greater success. Likewise, its still mysterious Treasure Islandz project has the Memeland and greater NFT community waiting with bated breath.

Beyond this, the Memeland website notes that it has several other projects in the works, including a “Tripadvisor for your Web3 journey,” a tongue-in-cheek “Web3 OnlyFans,” a site for crypto staking, and a platform for pet lovers. These sound like a tall order, but given what the Memeland team has done in the last seven months, it’s not unreasonable to expect them to deliver in spectacular fashion.

The post 9GAG’s Memeland: Meet The Studio Behind The Potatoz and Captainz appeared first on nft now.