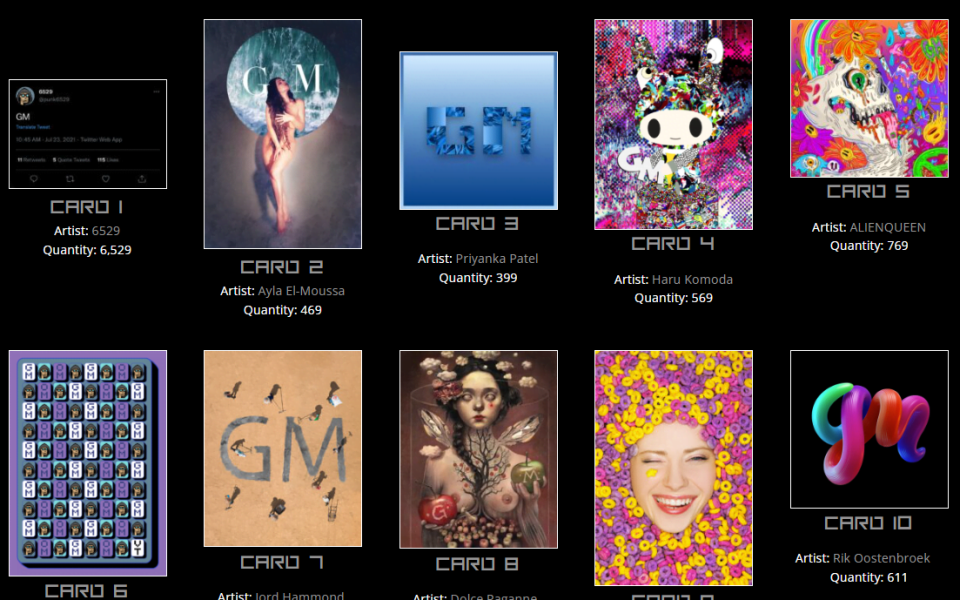 A Guide to The Memes by 6529: Building an Open Metaverse Through Humor

by docdna
in Culture, Guides, web3
Comments are off for this post.

Over their lifetime, memes have come to be understood as more than just cat pictures and fail videos that solicit the occasional laugh. In contrast to the often flippant nature of internet culture, memes have taken on great significance in mainstream and popular culture, achieving staying power as somewhat of a universal language.

This also rings true in the NFT space, where memes continue to be created, shared, and sold for incredible sums. Considering the off-kilter, self-deprecating, and sometimes even plain nonsensical nature of Web3, the culture on the blockchain would be nothing without humor, distilled and disseminated through memes.

But among the Rare Pepes and mfers that populate the comedy annals of Web3, one burgeoning project has begun to stand out. Though still relatively young in the grand scheme of NFT history, The Memes by 6529 brings collaborative humor to the blockchain while driving a conversation around decentralization, community, and self-sovereignty.

Exhibiting potentially the most straightforward NFT collection naming we’ve seen recently, The Memes by 6529 is essentially an amalgamation of NFT memes curated by prominent thought leader and Web3 builder 6529. But while the collection may seem like an aimless mish-mosh of memes to some, it comes as an integral part of the 6529 and Open Metaverse (OM) brand.

To understand the project’s full scope, we must first understand its creator. In plain terms, the pseudonymous collector 6529 (also known as Punk6529) is a Web3 voice of wisdom and a thought leader in the NFT space. First attaining notoriety in 2021 as a high-level NFT collector, he accrued respect throughout the early NFT bull run via his philosophical Twitter threads and as a champion of artists, easily becoming one of nft now’s 2022 NFT100 honorees.

Between the fall of 2021 and the winter of 2022, 6529 overtly transformed from an NFT collector into a full-fledged mission-driven builder. Championing the establishment of an open metaverse against centralized and corporate players like Meta, his OM project hinges on the idea that “100 million people in an open metaverse can change the world.” Currently, OM and the 6529 brand act as a hub for crypto-art exhibitions, unique edition collections, education, and more. This is where The Memes comes into play.

Having solidified himself as a leading force in the charge for an open metaverse, 6529 is utilizing The Memes to garner support for OM and to spread values of decentralization, community, and self-sovereignty far and wide. To this end, 6529 has crafted The Memes to be open and accessible, with edition sizes generally remaining large and inexpensive to maintain a low barrier to entry for all looking to join his cause.

What is The Memes, practically speaking?

The Memes — launched on June 9, 2022 — is a multi-level, multi-season NFT project that marries humor, collaboration, and Web3-centric messaging. Yet the idea (as well as the name) stems from Marxist ideologies — specifically, the notion that, for capitalism to collapse, workers must “seize the means of production.” That is to say that the working class would need to gain control of land, labor, and capital that can be used to produce products while banning private ownership and redistributing wealth more broadly.

In the NFT space, this phrase has been satirized and reconfigured to fit in with Web3 ideologies, emphasizing that meme culture is a driving force behind blockchain communities. So by seizing the memes of production, artists and creators are building a new creative economy via blockchain technology, giving power back to the working class of the creative industries. Yes, it’s a high-level concept, but one that has been boiled down to memes, art, and vibes via 6529’s The Memes.

The Memes collection features one complete season, comprising eight memes, each of which features somewhere between two to 11 limited-edition NFTs per meme. Memes can be thought of as prompts, meaning that artists who contribute an NFT to The Memes aim to create a visual representation of said meme (prompt). See Meme Four of Season One with the prompt “GM” below as an example.

To date, artists of all creeds have been invited to contribute an NFT to The Memes. Although the project started with a few simple editions crafted by 6529 and 6529er — the multidisciplinary designer who created the 6529 logo — it has since grown to encompass works from artists big and small, from photographers to illustrators to 3D artists and even NFT legends like XCOPY.

It’s important to note that each meme featured in The Memes coincides, in some way or another, with NFT or crypto culture. From innocuous sentiments like “WAGMI” and “Use a Hardware Wallet” all the way up to more action-driven, communist adjacent statements like “Freedon to Transact” and “Don’t Let the Institutions Steal Your JPEGs,” 6529 has carefully crafted the language of the project to be relatable to Web3 while speaking to those aforementioned values of decentralization, community, and self-sovereignty.

The future of The Memes

Now halfway through season two, it’s become clear that The Memes will continue to draw on the spirit of decentralized creativity and diversity to drive the project forward. With new contributions from artists like Cath Simard and Grant Riven Yun, The Memes continues to generate hype drop after drop, creating a sort of trojan horse NFT project. From the outside, The Memes seems like any other popular project, meaning price increases garner hype and bolster trading. Yet upon further inspection, The Memes has a meaningful connection to the core concepts of the blockchain.

Perhaps this is one of the main reasons The Memes keeps growing in popularity. Now just over half a year old, many of the initial meme NFT releases cannot be purchased for less than an ETH or two, and obtaining a complete set — meaning one of each meme released — has become somewhat of a legendary feat. In fact, only recently, a CryptoPunk was exchanged for a full set of The Memes, offering a historic point of reference to the growing value of The Memes.

But even as floor prices on nearly every edition in The Memes’ catalog increase, the project’s creator warns against the prospect of joining meme holder ranks simply to make a profit. Again speaking to the true meaning behind his brainchild, 6529 Tweeted a warning to his followers, urging them not to “buy meme cards to ‘make money,’” But instead to “buy them because you feel a sense of identity from ownership and want to help with the mission.”

The post A Guide to The Memes by 6529: Building an Open Metaverse Through Humor appeared first on nft now.