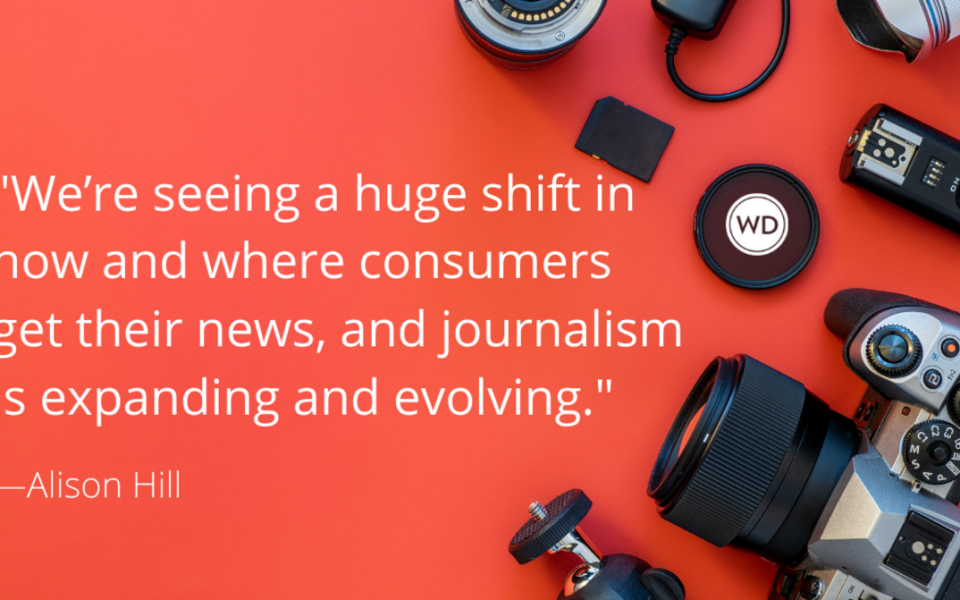 by docdna
in Articles, Interviews/Journalism, journalism, Publications, Write Better Nonfiction
Comments are off for this post.

Mitch Gelman, President and CEO of WCNY, was referring here to the ‘boots on the ground’ reporting of citizen journalists and bloggers in the aftermath of hurricane Katrina. A CNN.com executive producer at the time, Gelman was impressed with the ‘extraordinary first-person accounts’ posted online, which took audiences into “the heart and soul of the story.”

(What Is Investigative Journalism?)

Almost two decades later, not only are citizen journalists sharing their ‘point of view,’ some of them—podcasters especially—are beating traditional news outlets in the ‘journalism’ game and in the ratings department. As the mainstream media rapidly loses public trust, support, and credibility, people are switching off the nightly news and instead swiping their smartphones. We’ll look at some of the reasons why shortly.

But first, let’s define the roles of both forms of journalism.

Traditional journalism (the legacy or mainstream media) includes the mediums of television, radio, newspapers, news magazines and their online offshoots. These outlets are regulated by media law and press ethics and were once highly regarded as the bastions of reliable news. And before the internet, they were the only source.

Their role is disseminating information in an objective and unbiased manner, and employing qualified, trained, and vetted journalists, schooled in these protocols. Journalists are meant to be society’s watchdogs, charged with providing neutral, balanced, and accurate reports of events, and exposing the truth in government, business, and institutions.

Citizen journalists use platforms such as blogs, podcasts, social media, and YouTube. Technology has opened many doors and practically anyone with a smartphone and laptop, can report on a story. There is no gatekeeper for citizen journalists, most act independently and have no professional credentials. They immerse themselves in the story, reporting firsthand and immediately broadcast the uncensored footage online, often before ‘real’ reporters.

Podcasters and bloggers also fit under this umbrella, especially those tackling controversial topics, and are like commentators popular within news organizations. They are not held to the same standards as traditional journalists. But with their growing influence, many are demanding individuals be held accountable for their words.

Will the Journalism Industry Adapt?

We’re seeing a huge shift in how and where consumers get their news, and journalism is expanding and evolving. People have switched to the internet, for convenience and choice, and no longer rely on traditional outlets. It’s a world of instant information and ‘on the scene’ reporting, and citizens are filling a void left by a mainstream media astoundingly out of touch with ordinary people.

(How to Interview in the Age of Zoom.)

Many former traditional journalists, such as Pulitzer Prize winning Glenn Greenwald, have left the mainstream and established their own news sites, blogs, and newsletters, and successfully utilize online platforms such as Substack, a subscription-based service.

Meanwhile, traditional journalism is suffering. Hundreds of local newspapers, magazines, and newsrooms have closed. The major networks are owned by a few corporations, and conflict of interest is a major concern, as is the uniformity of news stories. Cable news networks have degenerated into soap boxes, budgets for investigative journalism have been slashed and in-depth analysis is disappearing. We see fewer journalists asking the tough questions and many important stories are either glossed over or completely ignored.

This is backed up by recent numbers from the Edelman trust barometer report, which reveals that trust in traditional news journalism is at an all-time low. Just 39% of people in the US said that they trust the media—down six points from 2021. Two-thirds of people worldwide view the government and media as divisive forces in society.

Established journalists often resent citizen journalists saying they have no right to the title, as they have none of the skills, training, qualifications, or experience. They are partly correct. Most are amateurs and the information can be questionable and is just as slanted as traditional media. The Edelman report also showed a significant dip in people’s trust of social media, it was right at 37%.

But the camera doesn’t lie, and footage shot by citizen journalists at the scene of an event is indisputable. As we’ve seen in the recent past, such footage can be powerful.

So, there’s distrust all around, but we could argue that traditional journalism, by its very nature, should be held to higher standards than citizen journalism. After all, they are the trained professionals and should know the protocols. And maybe there should be some basic rules for citizen journalism since it’s becoming so prevalent.

The bigger question is, who do viewers trust? There’s a message here for the journalists among us—the people have spoken and are switching off, so adapt or fade away.

Maybe it’s time for traditional journalists to stop looking from the outside in, leave their ivory towers, strap on their work boots, and get down into the muddy trenches with the citizen journalists. Then they can all dig out the truth together.

In this online course, we’ll talk about ­how to source, prioritize, and develop topic ideas; compose and refine pitches to multiple outlets; stay tightly organized about submissions, follow-ups, and correspondence; and execute assignments brilliantly—as well as why writers who query well, deliver on time, and prove easy to work are gold to editors everywhere.