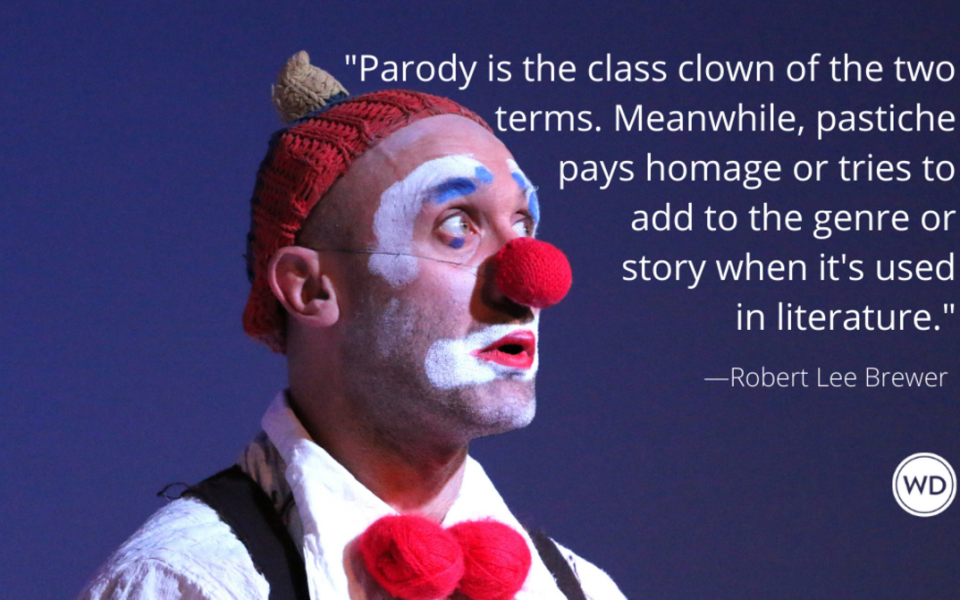 If you’ve heard the terms parody and pastiche tossed around, but you’re not sure how they’re different (or how they’re related), you’re in the right place. Because we’re about to look at what each word means and how these two similar terms differ.

Learn when you’re using parody vs. pastiche in your writing with Grammar Rules from the Writer’s Digest editors, including a few examples of each.

Parody is a noun that refers to a work of art or literature that is an exaggerated imitation of another piece of art or literature with the intent of making fun of the original and/or making an audience laugh as a result of the imitation. This is often seen in movies that take a super popular genre and make a movie about it. For instance, Shaun of the Dead (for zombie films, including Dawn of the Dead), Spaceballs (for the Star Wars series), and the Austin Powers movies (for the James Bond movies) are all parodies.

(What is Pastiche in Literature, and Why is Sherlock Holmes Perfect for it?)

Pastiche, meanwhile, is a noun that refers to a work of art or literature imitates another piece of art or literature with the intent of paying homage to or building upon the original. While a pastiche may find itself in a position to produce humor, that’s not the primary goal as it is in parody. If we go to the movies again, a good example of pastiche would be the Scream movies that pay homage and produce a few chuckles based on the slasher movies that preceded them. Sir Arthur Conan Doyle’s popular detective Sherlock Holmes is a very popular target for pastiche in literature, movies, and television.

A Final Word on Pastiche and Parody:

So both parody and pastiche are imitations, but there’s a key way to know which is which. Parody is the class clown of the two terms. Meanwhile, pastiche pays homage or tries to add to the genre or story when it’s used in literature. But don’t forget that pastiche can produce a laugh or three of its own while leaning into characters and familiar tropes.

No matter what type of writing you do, mastering the fundamentals of grammar and mechanics is an important first step to having a successful writing career.