Promoting Your Books With Tumblr Is Quick And Simple

by docdna
in Promote Your Book, Publications
Comments are off for this post.

Promoting books with Tumblr is often overlooked by self-published authors.

But with Tumblr, you can use your existing book promotion posts and articles to reach a new audience.

Tumblr is a cross between social media and microblogging and is very popular. But for authors, Tumblr’s reblogging feature is the big bonus.

It might be a surprise to learn how many people use Tumblr.

Here are some interesting statistics from TechJury.

Tumblr is the 25th most popular website in the US.

Tumblr.com is the 103rd most visited website in the world.

The total number of visits Tumblr received during January 2021 was 327 million.

To make a comparison, Twitter had 211 million active users in the third quarter of 2021.

From these statistics, you can see why it is worth thinking about promoting your books with Tumblr.

Promoting your books on Tumblr

Before you start, do a stocktake. Check your existing book promotion blog posts, articles, or where your book appears on promotion sites.

You can then use these to quickly start promoting on Tumblr using the reblogging feature.

Once you set up your account, you are ready to do some quick book promotion.

At the top of your Tumblr dashboard, you have seven options to create a new post.

The one you need to use for reblogging your book is the Link option.

When you click the link, you will see this screen.

All you need to do is copy and paste the URL link from one of your existing posts.

Then watch the magic happen. 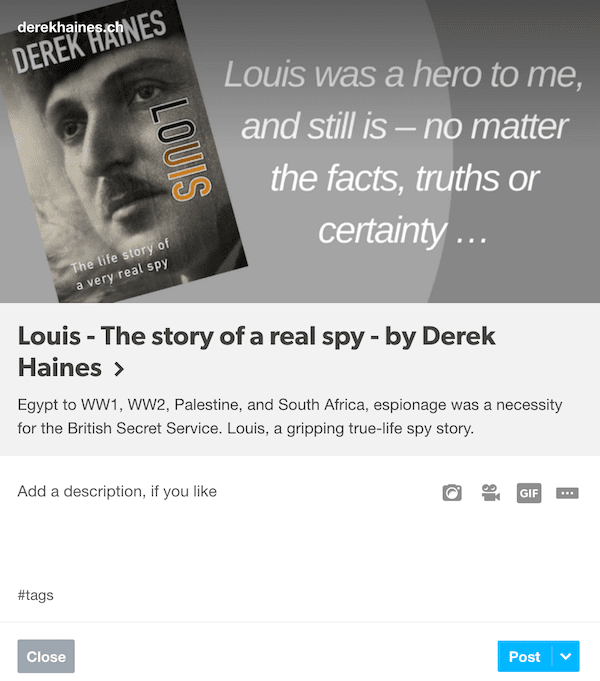 Tumblr automatically grabs your featured image and adds any SEO metadata included in your existing post, and it also adds a link back to your original post.

On top of that, your image is also a clickable link back to your post.

Add some text, and you are ready to publish your new post.

But there is one big extra bonus with Tumblr compared to some social networks.

It will accept portrait images, so your book cover will never be cropped.

Here’s an example from another promotional post for the same book.

As you can see, the book cover is in full.

All you need to do now is add some text to the description panel.

The quickest and easiest way is to copy and paste the text from your original post or article.

When you do, you will see that Tumblr even retains any links from your existing article.

It is a fantastic little feature because Tumblr users can click your social or book buy links. 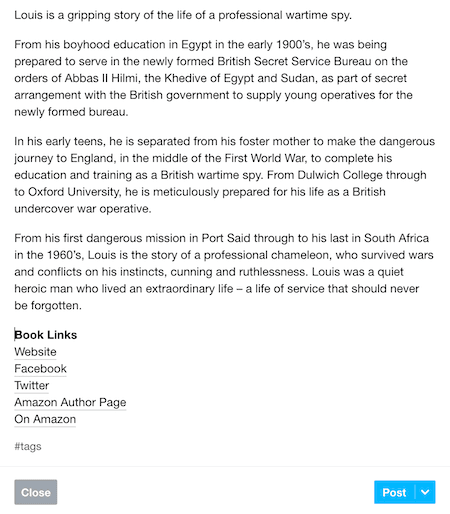 In all, it took me less than 30 seconds to create this Tumblr post. So you can see how quick and easy it is to use.

But it won’t happen if you are only posting your books. Make sure you add lots of other interesting content to attract people to your Tumblr page.

You can publish short text posts, photos, videos, or reblog topical articles from around the Internet.

Perhaps you have articles or news related to the theme of your book or reviews that you received.

One last tip is not to flood your feed in the first few days or weeks. Take it slowly and add one or two new items per day.

And like any other social network, look at following other users on Tumblr and interact a little.

If you have a little technical knowledge, Tumblr has a terrific little editor.

You can create new posts in rich text, HTML, or Markdown.

You can insert photos and images, GIFs, and videos into your posts.

Other options include adding tags, changing the post date, or creating a custom URL.

When you first start using Tumblr, there’s a short learning curve. But that’s the same for any new tool you use.

However, with all the options you get, it’s well worth the short time it takes to get familiar with it.

There is one last feature for those with technical skills. There is an API to automatically post to Tumblr from your WordPress blog.

You will need to use a premium social poster plugin to access this tool. But if you are into automation, you can investigate this option.

If you are a new author and you don’t have a blog yet, Tumblr is a great choice to get started with blogging about your book.

You don’t need any technical skills to set up an attractive blog.

Like other free blogging platforms, you can quickly design an attractive site.

At the bottom of your account menu, you’ll find the option to edit appearance. All the options are there to design your new site.

Yes, there are so many ways you can promote a book, and you are probably using a lot of them.

But Tumblr must be one of the easiest once you know how to use it.

You can get started so quickly with the content you already have on your blog, website, or promotional platforms.

But then, once you get to know how it works, you can add a lot of other content very quickly and build your following and sharing potential.

There’s no magic bullet or instant way to attract people’s interest on any social network. It always takes time and a little effort to build a new following.

However, with all the features and benefits that it offers, promoting your books on Tumblr is well worth considering.

The post Promoting Your Books With Tumblr Is Quick And Simple appeared first on Just Publishing Advice For Writers and Authors.