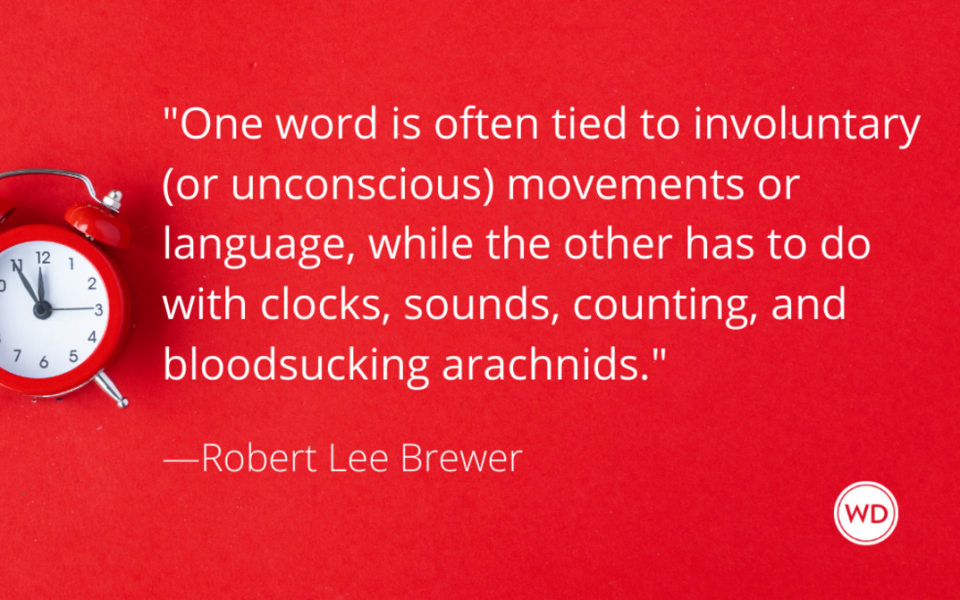 by docdna
in Grammar, Grammar Rules, Homophones, Publications, Write Better Fiction, Write Better Nonfiction
Comments are off for this post.

Tic and tick are homophones that have very different meanings. One word is often tied to involuntary (or unconscious) movements or language, while the other has to do with clocks, sounds, counting, and bloodsucking arachnids.

(Common Writing Mistakes and How to Fix Them.)

So let’s look at the differences between tic and tick and when to use each.

Tic is a noun that refers to a frequent quirk of behavior or speech of a person. For instance, a person who says “um” frequently between words or the word “like” would be considered to have a verbal tic or a person who crosses their arms whenever they talk or runs their fingers through their hair when they lie would be said to have a physical tic. This also includes a twitching of muscles, especially on the face.

Tick can be used as a noun or verb. As a noun, tick can refer to a small bloodsucking arachnid, the sound of a clock (or a repetitive sound that replicates the ticking of a clock), or a small mark used for counting or checking items on a list. As a verb, tick can refer to the action of making ticking sounds, counting things, or referring to something working in the correct way (as in “takes a licking and keeps on ticking”).

Here are a couple examples of tic and ticks:

OK, I’m not sure if this is the best trick for keeping these terms straight, but here we go. Since tic is mostly involuntary or unconscious, I like to think of it as the word without a “k” as in the action or speech was not given an “OK” by the person exhibiting a certain tic. I don’t know if that means that all other ticks are OK, but I’m not sure how else to handle this one. Feel free to share better memory tricks in the comments below.

No matter what type of writing you do, mastering the fundamentals of grammar and mechanics is an important first step to having a successful writing career.