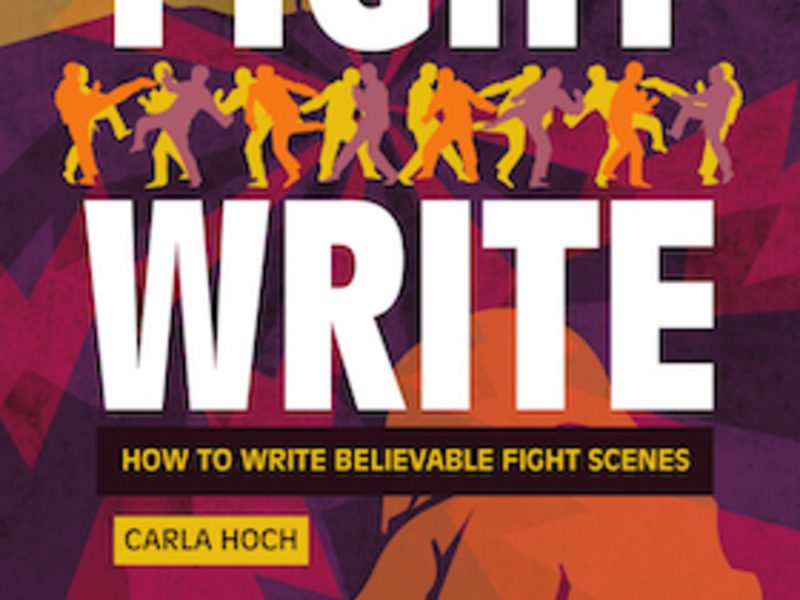 In the last FightWrite™ post on the WD blog, we looked at how the site can impact the fight. In this post, we are going to look at how the site can be part of the fight. Specifically, we will be considering weapons of opportunity that exist organically in the scene and can go from harmless to hazardous in the blink of an eye.

(Choosing a Setting for Your Fight Scene: FightWrite™)

A weapon of opportunity—or as I call it, a WOO—is any item that in its intended use is not a weapon but can be wielded as such. Ever seen a character on screen throw a vase at someone? It’s a staple trope of soap operas. That vase is a WOO and far more than just a flying object. There are levels of harm in that weaponized bit of decor that you might not have considered. Right now, one of those dangerous levels is that the vase will teach us how our characters can find weapons just about anywhere and be deadly no matter where they are. And, bonus, this post just might “ninjafy” you a bit as well.

When a vase is thrown as a blunt force weapon it can:

First, the thrown vase engages the body’s defensive reflexes. All animals and humans flinch when the brain perceives threat through visual, sound and/or touch stimuli. A flinch can involve blinking, squinting, turning away, and/or raising the hands and arms. As soon as the brain perceives that vase coming for the body, the body will protect itself by throwing the hands up to protect the face and head, possibly turn away, and shutting the eyes if only just for just a second.

If the assailed is a trained fighter, they may not flinch so easily. Fighters work to rewire their brain to respond productively to threat. But, even if that highly trained character doesn’t flinch, they will have to accept the strike of the vase, get out of its trajectory or bat it away. In all of those instances, the attention of the assailed fighter is divided, and they will not be able to attack as productively as they normally would. Even if the vase happens to be fake and made of plastic, the assailed will be slowed by batting it away, and/or their line of sight will be disturbed which hinders forward progress and aim.

In the brief moment that the assailed character defensively responds, the character throwing the vase can rush in for an attack, grab a weapon or make a getaway. If the character decides to run, even a tiny moment’s head start can make all the difference. The one chased always has an advantage because they are determining the course. They can quickly turn corners, throw doors shut in their wake, or knock things down and create obstacles in the path behind them. The pursuer can only react to what the pursued does and action is almost always faster than reaction.

Speaking of creating obstacles, the vase alone can create one. Unless the assailed catches the thrown vase, it will, at some point, hit something and shatter. That means there will be broken glass around the assailed. If that character isn’t wearing shoes, to make chase they will have to cross or jump over the glass. Both create the risk of a cut to the bottom of their foot which will not only be painful but, if the cut bleeds enough, can make the foot slippery and reduce traction. Less traction means slower running or possible slipping. If they are wearing shoes, they will still be treading over broken glass which creates an unsteady running surface which will slow them down as well.

Glass breaking can also mean flying shards. Those shards can create small cuts on the character’s exposed skin or get in their eyes. All of that creates more opportunity for the one who threw the vase to attack or escape.

Because WOOs are used impulsively, they tend to leave more evidence behind for the simple fact the person wielding them is likely in a panic and not considering the amount of evidence they are leaving behind. A thrown vase will leave pieces of glass everywhere all of which are keen bits of evidence. If that character sticks around to pick up all the glass, they will remain at the scene longer which isn’t great. Remaining at the crime scene leaves opportunity for another character to walk in and also creates a greater risk of leaving trace evidence, such as clothing fiber, behind. Also, if the vase does strike and knock out/kill the assailed, there will be evidence of a blunt force trauma that can’t be blamed on self-harm and may rule out accidental injury and death. It will be ruled a murder and a murderer will be sought. And, if the broken vase cuts the assailant’s finger, their DNA will link them to the murder in the worst way.

Finding WOOs All Around You

Now that you have looked at an everyday object as a weapon, let’s find a few more. If you are at your desk, you may have a pencil nearby. It can be used to stab. If you have a cup of coffee, the cup can be used for blunt force trauma and the coffee can be thrown at a face to burn it. The subsequent broken glass can create a barrier. The laptop computer on your desk can be used for blunt force trauma and held up in front of you to guard against a knife. The cord used to charge the laptop can be used to strangle, bind or whip. The legs of your glasses can gouge an eye, a reading light can be used to blind, the books around you can be hurled to distract or defend against a knife or blunt weapon. Oh, and your desk chair can be rolled around to create a buffer or corner someone and then injure them. Basically, whether you knew it or not, you are writing in an armory.

Writers, WOOs abound! There are martial arts, such as kung fu, that teach the use of weapons of opportunity. In one of my kung fu lessons, I was taught to hurl a coin at someone’s eyes with a snap motion of my fingers. It’s surprisingly effective. Now, you got to admit, the technique begs the question, why would kung fu teach something like that? Because if you were carrying coins and someone tried to rob you, you could use a few coins to distract the robber or injure their eyes to get away. Yes, you could beat the robber with the bag of coins, but you are more likely to lose coins that way.

When your character uses a weapon of opportunity, first consider what they will do with it. They will either use it to damage or create a way of escape. If they are using the WOO as a means to injury, imagine what that injury could be. Blunt force trauma? A laceration? A burn? Then, think of how you would physically respond if that weapon of opportunity were wielded on you. Would you flinch, dodge, run, duck? Even a highly trained assassin may do any of those as a means of defense because, in order to make use of their skills, they have to be able to see, focus and not suffer an injury that will dampen the effectiveness of their techniques. So, again, don’t think your highly trained character won’t jump out of the way of something just like you would.

Start looking around the world differently. Look at what WOOs are in different areas of your house, your job, anywhere you go. And, not only because you are a writer, but because you are a human who may need to defend yourself and the ones you love. Just about anything can be dangerous when wielded effectively—because the deadliest weapon on earth isn’t anything that can be picked up. Things are just stuff. It’s not until the most life-threatening weapon on earth gets involved that stuff gets “stabby.” And, that mortal weapon is always with you: your mind.

Don’t just create a fight in a scene. Make the site part of the fight. Until the next round at FightWrite™ on the WD blog, get blood on your pages.