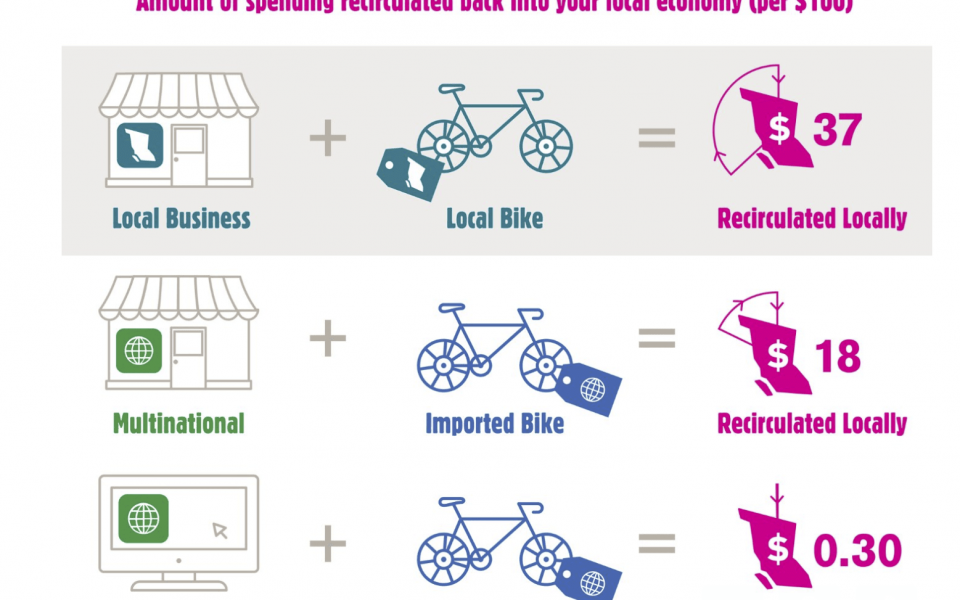 What Is Localism and How Does it Relate to Local SEO?

by docdna
in Internet Marketing
Comments are off for this post.

Local search marketing is a form of publicity unlike any other because of its potential for creating positive social change.

July 2022 is Independent Business Month and the perfect moment to reinvigorate our work as local SEOs by reflecting on the meaningful bigger picture to which we’re contributing. I’ve heard European social commentators say that you can’t publish books in America with the word “virtue” in their titles, but when an independent business owner opens their doors, it instigates a true virtuous cycle. When marketers have the honor of entering that cycle, we’re participating in something even more important than “traffic”, “conversions”, or “growth”; we’re contributing to the force for good known as localism.

It can be an outcome of continual work with analytics and statistics to slip into viewing everything as a numbers game, but in local, each of those numbers is a real individual, a neighbor with a story, with needs. This month, we have the opportunity to re-center people, community, and environment by considering the definition of localism and seeing how our work in local SEO matters.

A definition of economic localism

I can’t say it better than this:

“Localism is about building communities that are more healthy and sustainable – backed by local economies that are stronger and more resilient. It means we use regional resources to meet our needs – reconnecting eaters with farmers, investors with entrepreneurs, and business owners with the communities and natural places on which they depend. Economic success is measured less by production than by providing a decent standard of living for the most people while living in harmony with natural systems.” – Business Alliance for Local Living Economies (BAILLE)

In other words, instead of mere profits being the ultimate goal of this way of participating in civic life, localism strives to reduce suffering by building a community that actually functions well for everybody who lives in it – what the Reverend Doctor Martin Luther King, Jr. might have termed “a glorious and healthy place to inhabit”.

The benefits of localism

The most immediate and obvious benefit of economic localism is that the money you spend keeps circulating amongst your neighbors. As illustrated above, you buy a bike and put money into the pocket of the local bike shop owner. On their lunch break, the bike shop owner cycles down the road for lunch and hands your money over to the local restaurateur. After work, the restaurateur takes your money to the local hardware store to pick up some locally-grown veggie starts for their home garden. The next morning, the hardware store owner is using your money to pay part of their electricity bill to the community-owned utility. A few weeks later, an engineer at the utility company is using your money to donate to a new bike path being made in your community so that there are safer places for cyclists like you to ride.

In sum, a community built on localism recycles its money so that it can be dedicated to local people’s needs and projects, but a community without this model becomes increasingly under-funded because its wealth is leaking away into the wallets of national, multi-national, and remote entities with no stake in local life. When your community needs a new fire engine, repairs to the town hall, or schoolbooks, the money is there within the city instead of lost forever to the coffers of Walmart or Amazon where the CEOs have no thoughts about your local needs. So, basic economic localism begins with ensuring that local wealth is recycled instead of extracted, but this is just the first of its benefits and we’ll look at a few more that deserve priority focus.

Environmental protections and localism go hand in hand, rooted in the acknowledgement that we have no life, no business, no anything without the Earth. Local delivery of your essential needs cuts carbon emissions in half vs. remote ecommerce shopping. Meanwhile, the central location of typical Main Streets means people can choose to walk, bike, or drive a much shorter distance to shop, while big box stores (which usually take up formerly-open or agricultural lands on the outskirts of cities) tripled pollution from driving between 1969 – 2009. George Washington University links two million annual new cases of pediatric asthma to driving our cars, meaning the less we use fossil fuel vehicles, the better our children can breathe. And as for formerly-green spaces acting as the healthy ecological lungs of your whole community, an economy driven by localism can defund big box sprawl and restore wetlands, waterways, and farmlands where megastores and asphalt used to be.

Political will and power

At the most hyperlocal level, towns and cities running on localism can shape their own economic landscapes. Communities have repeatedly demonstrated the power to keep big boxes out and diverse small businesses open so that shoppers have some very meaningful choices at their disposal. Buy Local associations and related groups also have real power to help sway local elections and policies which determine how towns and cities develop and grow, directly impacting life quality for all residents.

Zooming out on the map, these local actions can have national benefits. A dilemma facing conscientious consumers is when their need for everyday goods collides with the dominance of monopolies that fund undesirable politicians and policies. The distress is real when, for example, a shopper becomes aware that there have been some 500 shootings at US grocery stores since 2020 and discovers that the chain where they shop is funding candidates or legislation promoting the sale of assault weapons. The Universal Declaration of Human Rights guarantees “life, liberty and safety of person” for all people, but if a big brand doesn’t uphold these conventions, resulting in the deaths or terrorization of its customers, ethical people will not want to do business with that company. When one town refuses to let such a business operate in their community, it is one small victory; when multiple towns do the same, it can govern the behavior and fate of that brand at a national level.

The American Psychological Association finds that our chances of premature death are cut in half if we are protected from suffering loneliness and the Cambridge Journal of Regions proposes that there is a direct tie between local health and the proportion of small businesses in a community. When your local business owners, farmers, artisans, educators, and public servants know you by name, you experience the kind of quality social interactions that are a safeguard against isolation, despair, and untimely mortality.

Localism can not only help you live longer, but it can make the savor of your years so much richer, with there being unique and interesting things to see and do in your town. Americans take 2.29 billion domestic trips every year, and when you think about the impulse to visit other places, it can’t be so that you can experience the exact same big boxes and fast food franchises in millions of cities! Rather, you want to walk and taste the real New Orleans, or San Francisco, or Seattle. If your town is host to a famous garlic festival, or apple fair, or chili cookoff, guard this regional richness from the kind of corporate homogeneity that would make colorless carbon copies out of vivid places to be alive. Localism can actually make the difference between human suffering and human joy.

The honor of working in local SEO

I confess to getting very excited whenever I think or talk about this: local SEOs have the skills to help shape towns and countries they actually want to live in. All those years we put in studying search and local commerce have actually empowered us to directly promote the independent businesses which bring the multiple benefits of localism to life. In fact, we can think of our abilities as a toolkit for rebalancing the economy, society, and even the planet.

How does that work?

It’s quite simple: any time your work results in an independently-owned small business outranking a corporate one, you are making it easier for local shoppers to choose localism.

It’s a struggle to compete against the endless marketing budgets of national brands, but your skills at performing deft competitive local audits and quickly seeing a path towards greater independent business visibility are actually a key contribution to helping the public discover and choose a more humane and habitable future. In fact, filling your client roster with an eye to localism aligns your work life with the dignity of immigrants who own about ¼ of small US businesses, with minority-owned US businesses which are 99.9% SMBs, and with a massive and necessary reduction in everybody’s carbon footprint. It’s estimated that Americans will spend about ⅓ of their total lives at work; it’s heartening to know we have an option to commit all those hours to public good.

Our opponents won’t quit any time soon. We can slide into feeling helpless when our Twitter feeds are comprised of news about Amazon greenwashing Earth Day while allegedly underreporting its unsustainable carbon emissions, Walmart paying its employees such low wages that the company has become the nation’s largest recipient of welfare, and Target union busting while Starbucks threatens to close a shop where workers managed to unionize.

Local SEOs, happily, are not powerless, because we can choose to be sure that there are other highly visible places for people to buy food, books, clothes, housewares, and a cup of coffee. We can embrace the honor of using our substantial marketing skills to amplify the narrative of localism, in partnership with our clients, to address the societal heartaches that hurt us most and get busy on the must-do work of healing the planet. No small tasks, perhaps, but what a tantalizing offer life is presenting us with to resolve to market for the common good.