Previous postCan AI Perform SEO? Experimenting With OpenAI’s GPT-3 via @sejournal, @VincentTerrasi
How to Use the Weighted Average Formula in ExcelNext post 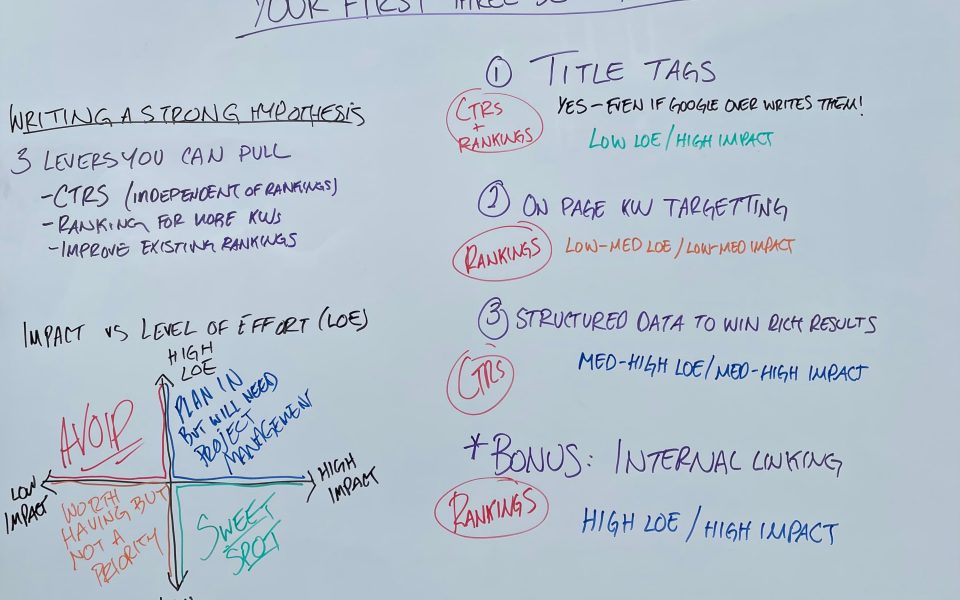 by docdna
in Internet Marketing
Comments are off for this post.

Emily Potter, Head of Customer Success at SearchPilot, is an SEO A/B testing expert. Today, she returns as a Whiteboard Friday host to share with you the first three SEO tests you should run to kick-start your SEO testing program.

Click on the whiteboard image above to open a high resolution version in a new tab!

Howdy, Moz. I’m Emily Potter. I’m Head of Customer Success at SearchPilot. If you haven’t heard of us before, SearchPilot is an A/B testing software that was built specifically for the SEO industry. We run large-scale SEO tests on enterprise websites.

Today I’m here to share with you the first three SEO tests ]that you should run to kick-start your SEO testing program. But before we get into that, there are some foundations that we need to cover first. That’s how to write a strong SEO hypothesis and then how to prioritize your SEO tests.

Starting with your hypothesis, you might not think of it this way, but every SEO optimization that you’re making is trying to impact one of three mechanisms, and these three mechanisms are the only way we can improve organic traffic. At SearchPilot, we call these our three core levers.

So that’s improving your organic click-through rates independent of rankings. By that I mean, yes, you can improve your organic click-through rates by going from position two to position one, but there are other ways you can do that as well. That’s ways that you enhance your search results so that you stand out against search competitors, like getting rich results or rich snippets.

Our last lever is improving our existing rankings. So that’s links, improving Core Web Vitals, adding more content. All of those big, known ranking factors that we can target with SEO tests, that’s a big driver of organic traffic.

So the three core levers, we need to be pulling at least one of them to have a valid SEO hypothesis. If you come up with a test idea and you can’t actually find a way that it clearly pulls one of these core levers, then it’s probably not a true SEO hypothesis and you probably shouldn’t run it. You might want to consider running it as a CRO only test instead, but it shouldn’t be your SEO testing program.

So now that you know how to write a strong SEO hypothesis, let’s talk about how to prioritize your SEO test ideas. At SearchPilot to do this, we use two core metrics. We look at potential impact and then level of effort or LOE.

In this quadrant, I have, on the vertical axis, high level of effort to low level of effort, and on the horizontal axis, I have high impact to low impact. In the upper left-hand quadrant I put “Avoid.” So those are high level of effort tests that are also low potential impact. These are tests that are going to have heavy uplift from your engineering team, but aren’t likely to pull a core lever and therefore probably not a good test for you to run and probably not worth your time. Just rule these tests out. Make them not even a priority.

Upper right-hand quadrant, we have high impact tests that are also high level of effort. So those are things like internal links or anything that’s going to involve a lot of engineering support, but you know is going to potentially be a big win. It strongly pulls one of these levers. So you really want to put these in, but they probably require project management. It involves multiple teams working together, that sort of thing. Plan those in later. They shouldn’t be your first three tests.

In the lower left-hand quadrant, we have low impact tests that are also low level of effort. I put this in amber because you should have these in your testing program. You still want to run them. Again, they shouldn’t be your top priority tests, but sometimes they produce surprising results. So these are things that maybe pull a lever but are easy to implement. Or they are low impact changes, like adding alt text, that we know don’t cause big swings in organic traffic, but, again, you might get surprising results. Or they’re just good practice to do anyway.

Lastly, we have what I call the sweet spot. Those are your high impact tests that are low level of effort. So these ones we want to prioritize. They pull the lever strongly but they actually don’t require that much effort for us to put in, and those are your biggest return on investment tests and you should prioritize them.

So now that we know how to write a strong SEO hypothesis and we know how to think about prioritizing our test ideas, let’s talk about the first three that you should run.

Test number one, title tag tests, and yes, even if Google is overwriting your title tags, definitely still be testing them. We’ve seen wins even since that rollout, and it’s definitely low-hanging fruit that you can grab. Title tag tests impact both click-through rates independent of rankings and they also impact your rankings. So that’s why there are such big swings that we get from them. So something like adding price to your titles, good test, probably just targeting click-through rates. Something like adding a really big, primary keyword might impact both your click-through rates and your rankings. Put these in. Low level of effort, high impact tests, they’re in our sweet spot.

Next we want to run on-page keyword targeting tests. So things that are changing the keyword targeting maybe to something like a higher search volume keyword. This can be adding content. This can be updating headings. H1 changes fall into this category. I put these as low to medium impact and low to medium level of effort. So generally still pretty easy to run. Not going to cause as big of swings as title tags, but we definitely want to prioritize those in early on, targeting our rankings.

Third, I put structured data to win rich results. These are medium to high level of effort, but also medium to high impact. So this is things like adding schema, review schema to get review snippets. They tend to involve a little bit more effort because oftentimes you might need engineering resources to get that schema into your HTML, or you might need to get the data somehow that you want to include in the structured data. But they’re important SEO tests, and they tend to have a little bit less lift than other higher impact tests that are also higher level of effort.

For example, I’ve put a bonus on here — internal linking tests. These fall into that quadrant that are high impact, high level of effort. Internal linking tests are high level of effort not only because you need engineering resources oftentimes to implement them. It’s also really difficult to figure out the measurement for these tests. That’s because we’re changing two different pages. We’re going to expect to see an impact on the pages where we’re adding the links. We’re also going to expect to see an impact on the pages that are receiving a link. But these cause big wins for SEO, so we definitely want to plan these tests in, but not one of your first three tests. These are going to be targeting your rankings.

So that’s what I have for you today. Again, your first three SEO tests to run — title tag tests, improving your keyword targeting on the page, and adding structured data to win rankings. As a bonus, plan in those internal linking tests, but it’s going to involve a lot of different teams probably to get those done. And then, remember, if you’re not coming back to one of these core levers, if you’re not improving either click-through rates independent of rankings, ranking for more keywords, or improving your existing rankings, probably not an SEO test.

That’s all I have for you today. Thanks, Moz.