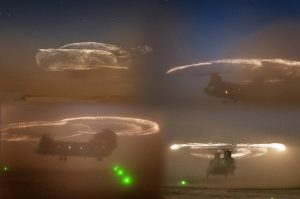 We know a lot more now about St Elmo’s fire than the ancient sailors who named the phenomenon. According to the American Heritage Dictionary St Elmo’s Fire is “A visible and sometimes audible electric discharge projecting from a pointed object, such as the mast of a ship or the wing of an airplane, during an electrical storm. First identified as an electrical phenomenon by Benjamin Franklin in 1749, St. Elmo’s fire is a bluish-white plasma caused by the release of electrons in a strong electric field (200 or more volts per cm); the electrons have enough energy to ionize atoms in the air and cause them to glow. The phenomenon appears near pointed objects because electrical fields generated by charged surfaces are strongest where curves are sharpest. It is named after St. Elmo, the patron saint of mariners, as the phenomenon was often observed by sailors during thunderstorms at sea.”

Today the bluish-white plasma glow has been observed on ships at sea, around the nose and wings of airplanes, around helicopter blades, and in neon signs. When St Elmo’s fire is created in the atmosphere it’s a signal of approaching thunderstorms showing that the air has an electrical charge. In neon tubes the phenomenon lights our way to various establishments and serves as a beacon or guide.

In this respect the latest research about how to generate income or build a business online serves the same purpose. The highlights from the research provide the “light” or illumination we need to be more successful. It’s with that purpose or spirit that these summaries will provide you specific directions on how to make a lot more money online. The charts are intended to be those points of light or St Elmo’s fire we can use to guide our internet marketing efforts.

To see how this is related to what we know about internet marketing, read the full article on Vocal at Flashes of Brilliance and How to Make More Money Online