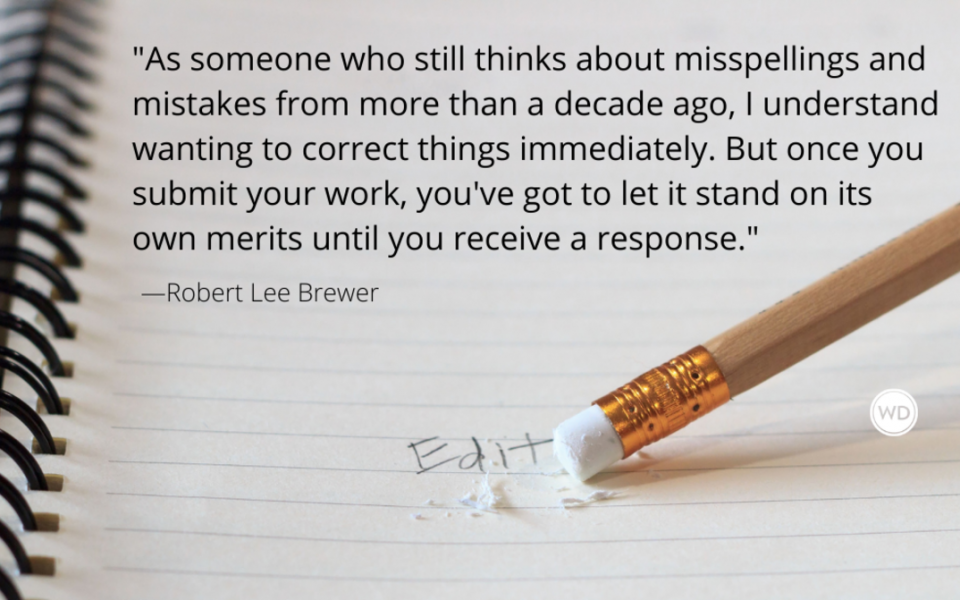 Writing Mistakes Writers Make: Correcting Submissions Before You Hear Back

by docdna
in Get Published, getting published, pitching, Publications, querying, submissions, Submissions & Proposals, Write My Query, Writing Mistakes Writers Make
Comments are off for this post.

Everyone makes mistakes—even writers—but that’s OK because each mistake is a great learning opportunity. The Writer’s Digest team has witnessed many mistakes over the years, so we started this series to help identify them early in the process. Note: The mistakes in this series aren’t focused on grammar rules, though we offer help in that area as well.

Rather, we’re looking at bigger picture mistakes and mishaps, including the error of using too much exposition, hiding your pitch, or chasing trends. This week’s writing mistake writers make is tying to correct errors in your submission before hearing back.

Writing Mistakes Writers Make: Correcting Submissions Before You Hear Back

As an editor, I’ve received a lot of submissions over the years. So I have a good handle on things I personally like to see and would prefer not to see. One of the biggest red flags for me is when a writer sends in a pitch or article on spec and then starts sending in corrected versions of their submission…before I’ve had a chance to say yay or nay.

I love my job and like to keep myself busy. So I’ve always got more on my plate than I can handle when things are going good. It also means that I really love and appreciate working with people who make my life easier. Writers who start correcting their submissions before I’ve even approved or rejected the project do not fit that bill.

And here’s why from my perspective: My inbox starts to fill up with multiple messages from the same person AND those messages are for a project that may not even be accepted by me. Plus, as a result of having multiple messages from the same person, I have to read through and cross-reference each message before responding to any of them. It slows me down and makes my job, which I love, mind you, not as much fun and definitely less productive.

As a result, this writing mistake writers make can often lead to an instant rejection, unless I’m just head over heels in love with the pitch, which is often less likely, because of the overwhelming wave of messages.

So you made a typo, now what? I say it’s better to let it stand until you hear back from the editor or agent. I, and many other publishing professionals, can forgive a typo if the rest of the submission is outstanding. Everyone makes them (or they’re lying). However, I have trouble forgiving a flooded inbox.

(The 7 Deadly Sins of Novelists According to Editors.)

So you made several typos, now what? Again, it’s better to let it stand until you hear back from the editor or agent. Excessively sloppy submissions are more likely to get rejected, that’s true, but your attempt to correct the record won’t make the first submission go away. It still happened, but now you’re bringing more attention to it and to you.

If you’re going to get rejected anyway, it’s better to fade into the background so that you can submit again on another day. Editors and agents reject a lot more submissions than we accept, so we don’t tend to take notice of the rejections unless they really, really stand out. But if you start drawing more attention to yourself and your name with several follow ups, that can start to put you in that category.

That said, there is a time for suggesting corrections, and that is once the piece has been accepted. Even if your submission is flawless, odds are good that editors and agents are going to have suggestions for corrections anyway, so that’s the time to mention possible improvements.

As someone who still thinks about misspellings and mistakes from more than a decade ago, I understand wanting to correct things immediately. But once you submit your work, you’ve got to let it stand on its own merits until you receive a response.

Breaking into traditional book publishing can be tough work. After you write and revise the book, there’s finding an agent or an independent publisher, which involves time spent researching instead of what you really want to be doing—writing. So, Writer’s Digest has done the work for you with this 144-page guide. The Get Published in 2022: Breaking In Resource Directory collects the resources you need to make 2022 the year your book gets published.