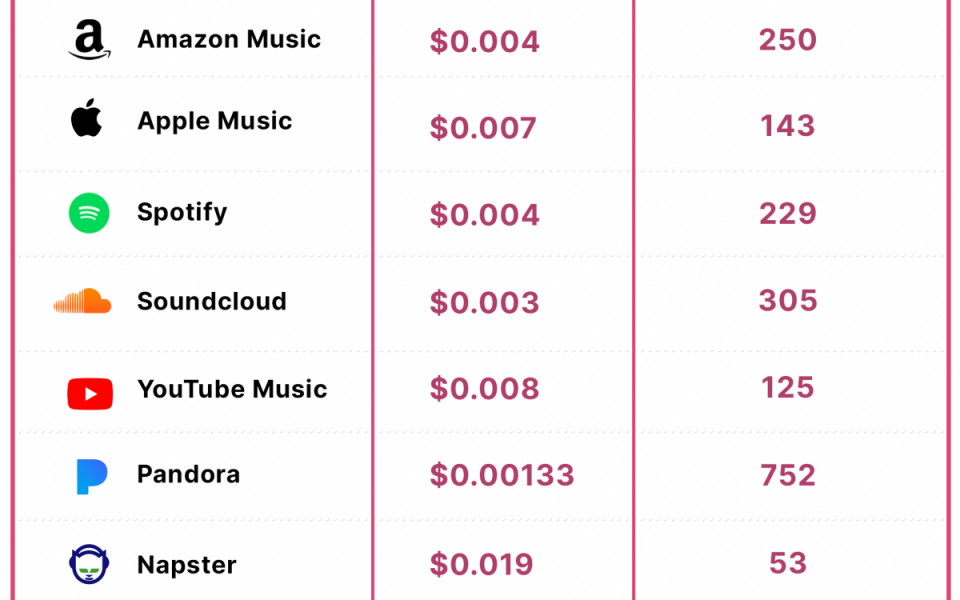 How NFTS Are Forging a New Creative Economy for Musicians

by docdna
in Music, Sponsored
Comments are off for this post.

It’s no secret that the music industry’s business models don’t benefit most artists. According to the 2018 MIRA Survey of Musicians, musicians in the United States have a median annual income of less than $25,000 per year. If that’s not damning enough, 61 percent of musicians say the income they receive from their music isn’t enough to meet their cost of living.

The problem? Major labels and streaming services take the lion’s share of the revenue, eating a sizable portion of artists’ earnings.

According to Statista, Spotify generated more than $10 billion in revenue in 2021. However, they only pay artists between $.003 and $.005 per stream. That’s about one dollar per 250 streams. Sadly, the numbers aren’t much better when you look at other streaming platforms.

But money isn’t the only thing artists sacrifice. They often give up their creative control too. This usually includes things like having no say in lyrics, what songs make it onto an album, or when albums are released. In many cases, artists also relinquish their master rights (the rights to their recordings) to their label. As a result, they don’t even own the copyright to the recordings of their music. Since the label owns the masters, they decide where and when the recordings are used, sometimes in perpetuity.

However, non-fungible tokens (NFTs) are finally changing things. Recently, nft now spoke with a variety of artists and industry experts to uncover precisely how NFTs are changing the nature of the game.

A music NFT is a tokenized version of a piece of music, such as a song, album, or even a music video. Thanks to NFTs and blockchain technology, artists now have the opportunity to earn money while still retaining their creative control. Sound.xyz, Royal, and OneOf’s CO//SIGN program are giving birth to a new kind of creative economy, one that lets artists share their music NFTs with the world and earn a living.

Instead of waiting for approval from industry gatekeepers, NFTs give artists like CO//SIGN’s Rakeem Miles the ability to drop new music whenever they please. “There are a lot of boundaries around releasing music with record labels. There are certain systems and timing you need to wait for. NFTs open up the opportunity for independent artists that are trying to build their brand from the start,” he said in an interview with nft now.

Ultimately, Miles says that NFTs allow him to work according to his own timing and terms. “Being able to put your art on a platform for your fans to directly consume is a really dope opportunity to have because you can basically turn that opportunity on anytime you want. Whenever you want, you can say, ‘hey guys, I need you to check out this record,” he added.

And it seems that this setup works quite well for him. Miles’ first drop with One//Of sold out in less than five days.

However, that doesn’t mean that we are reaching the end of record labels and promoters. In an interview with nft now, Adam Fell, the co-founder of OneOf and President at Quincy Jones Productions, said that NFTs aren’t zero-sum disruptors. Instead, he thinks they help artists and labels partner in better and more equitable ways. He explained, “NFTs allow an artist to get access to capital without going into debt, without taking a loan against one of their future revenue streams, so they can negotiate better deals later in their careers with the big companies. I don’t think this is something that replaces the labels. I think it’s a win for everyone in the ecosystem.”

Of course, NFTs are still in their infancy. As such, it will likely be some time before we know whether or not Fell is correct in his assessment and if the role of record label will change dramatically — or, indeed, at all.

The role of the fan, however? That’s already shifted significantly.

Unlike in the traditional music industry, fans who collect music NFTs are rewarded when a musician they like succeeds. In this respect, Fell says music NFTs have upended the traditional role of the fan as a passive listener and consumer. In short, he argues that music NFTs don’t just empower artists — they also empower fans.

“If you use NFTs to create value for your fans, what you’re doing is replacing the web2 artist’s fan club model with a new model where you empower your fans, and those fans become your Web3 street team,” Fell said. “Since you’ve created value for your Web3 street team, they’re your greatest evangelists. If you have an army of people who are your greatest evangelists, you have your truest fans,” he explained.

Indeed, in the last year alone, artists of all sizes have used music NFTs in various ways to empower and reward their fans. Here are just a few examples:

Music NFTs have also provided a much-needed layer of transparency to a historically secretive and closed-off industry.

Cherie Hu, Founder of Water & Music, a research DAO focused on music, tech, and Web3, explained to nft now how important the blockchain’s accurate and immutable data is for researchers in all industries.

“Along with an unprecedented amount of hype, Web3 has brought very tangible experimentation that you can track and verify. It’s motivating because it can be very difficult to find accurate data in the music industry. You see people massaging numbers all the time. I think we are only really scratching the surface of what implications this can have far beyond music, in the worlds of privacy and finance in general,” she said.

But above all, Hu is amazed by the impact Web3 and NFTs have already had when it comes to fostering community.

“Web3 has brought new life into the spirit of innovation and experimentation within the [music] industry and community. The way information flows on the community side of the Water & Music DAO is so fluid. People are so open to collaborating, helping each other out, and being very realistic about what does and doesn’t work with this current technology because it’s still very complex,” she added.

In short, NFTs are possibly the most significant innovation the music industry has seen since the introduction of streaming. However, music NFTs definitely shouldn’t be seen as a panacea. They don’t magically solve all the problems artists face.

In an interview with nft now, Spottie WiFi noted that, when it comes to music NFTs, many musicians face high barriers to entry. The problem, as he articulates it, is that many artists don’t have the technical know-how or resources to dive into the space.

“The hard thing about innovating with NFTs is, in most cases, you need your own team of developers and legal team if you want to do it right,” he said. To solve this issue, Spottie says that those with the necessary knowledge need to work together to create tools and systems that lower the barrier to entry. “We need to get to a point where developers are incentivized to create open-source tools that are free to use and easy-to-use one-click solutions where a musician can say, ‘I want to do a very unique drop,’” he said.

However, a number of organizations and individuals are already working to solve this and ease the onboarding process.

Backed by Quincy Jones, OneOf uses its CO//SIGN program to partner with emerging artists and provide them with the resources and infrastructure needed to launch their own “rookie card” NFT collections. Investing in an artist’s “rookie card” lets fans directly fund their favorite artist’s careers while also receiving a digital collectible that can grow in value over time and be traded on the OneOf marketplace.

And thanks to their partnership with MoonPay, OneOf accepts payment using all major payment methods, making buying and selling NFTs a tad easier for artists and fans alike. For CO//SIGN artists like Mazie, who had already heard of NFTs but hadn’t yet recognized their full potential, the partnership was a perfect fit.

“I had always understood crypto and NFTs peripherally, but once OneOf reached out and explained the entire process, it completely opened up the potential […] I love the idea that my fans could make an investment in me and make a return on their investment because, outside of the creative who’s making the music, those are the people who break the artist. It’s not the team; it’s genuinely the fan. So to be able to let them participate in a greater way is really exciting,” she said.

Despite all the excitement, music NFTs are still very early, and much of their future impact is still unseen. But between the artist benefits, the fan benefits, and the increased transparency of the blockchain, there’s no question that music NFTs will leave an imprint on the industry for years to come.

The post How NFTS Are Forging a New Creative Economy for Musicians appeared first on nft now.